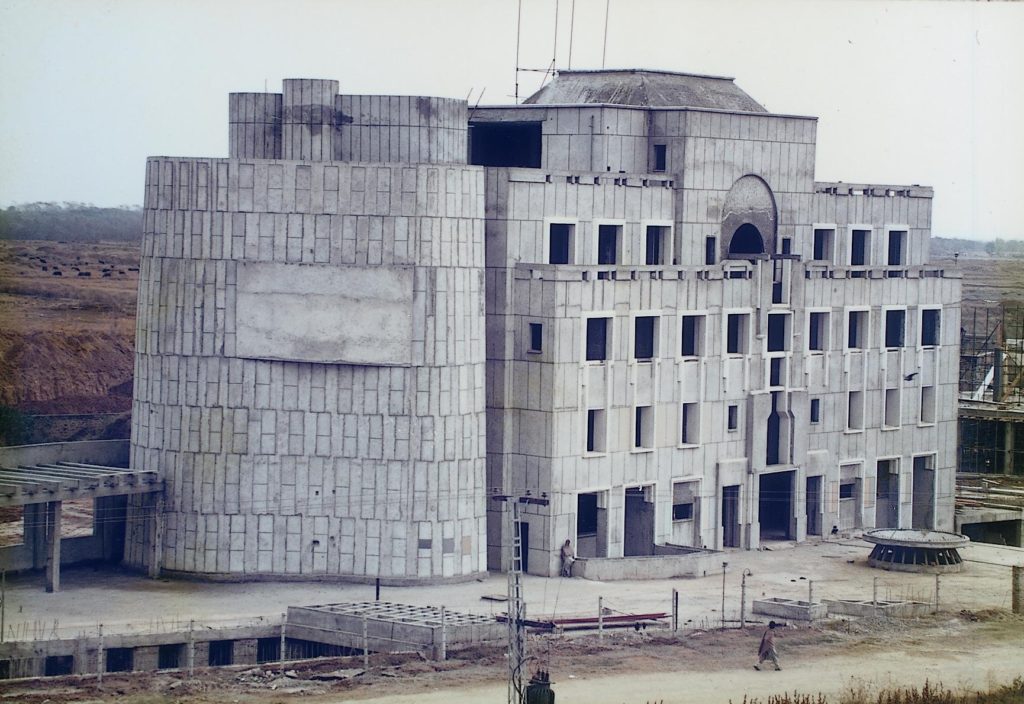 The Hospital was incorporated on September 20, 1987 as a Private Limited Company and converted into Public Limited Company on October 12, 1989. The first Shifa office was established at the residence of Dr. Zaheer Ahmad in sector F-8/3 of Islamabad. Later it was moved to a rental place in Blue Area (commercial buildings area in Islamabad), and finally the site office building was established in January 1988.
The construction activity to prepare the site for laying the foundation of the Hospital was started in the beginning of 1988. The foundation ceremony took place on October 06, 1989 by the parents and well-wishers of the sponsors and their dedicated team of colleagues and well- wishers.
The idea of developing a high class medical facility in Pakistan was conceived in New York, USA in the mid of 1985. The initiator Dr. Zaheer Ahmad, who had just finished his Internal Medicine Residency, called a meeting at his apartment in Brooklyn, New York on the weekend of July 20 & 21. Five professionals gathered there and discussed the idea in detail and approved it. The participants included Dr. Manzoor H. Qazi from Leesville, Louisiana, Mr. Muhammad Zahid from Kew Gardens, New York, Mr. Samiullah Sharief from Brooklyn, New York, Dr. Sabir Ali from Palm Bay, Florida and Dr. Zaheer himself. Dr. Zaheer Ahmad was asked to prepare the feasibility report and the action plan. Subsequently Dr. Zaheer Ahmad moved to Islamabad on December 17, 1985 to start the work on this project.
After extensive discussions and many meetings, the present site in the capital city of Islamabad was selected for this project. The name Shifa was approved because of its comprehensiveness, originating from our culture, belief and values in totality.
After acquiring over 11 acres of land in Islamabad in 1987, CRI, a hospital development company in Princeton, New Jersey was hired to develop the plan and design of the project. Mr. William Parker, Chief Architect of CRI headed the team, visited the site in Islamabad besides visiting the other hospitals across Pakistan. CRI finished its job in 1989.
Nevertheless it is an unending journey. People at Shifa are continuously striving hard to bring improvement and novelty with every passing moment.
Now after over two decades, Shifa International Hospital proudly stands as a symbol of quality healthcare with its own brand name Shifa. The short history of Shifa witnessed rare dedication and devotion of its consultants, management and staff who worked round the clock to make Shifa a reality of its own.
It was the vision of the founding Sponsors which took its shape into reality. The task was made possible only with the help of a dedicated team of experts and managers under quality-oriented and inspiring leadership. Allah’s grace made it feasible and viable to carry out such a gigantic and enormous venture. Unique in its concept and efforts set up by the expatriate Pakistanis to repay their homeland with a beautiful gift in the form of a functional institution in the healthcare industry of Pakistan.